What RASCOW*, Soliton’s network bonding technology can do under extreme condition

Stunt flying is a high adrenaline activity for the pilot and an awe-inspiring visual experience for spectators on the ground. But allowing the spectators to also have a visual experience from a pilot prospective in real time is a major groundbreaking development, and this was made possible by the Paul Bennet Airshow team at the Seoul Airshow.

In October 2019, Soliton had an opportunity to work with the Paul Bennet Airshows (PBA) who are a world leading premier air display team from Australia. The Seoul International Airshow (ADEX) is one of the largest international airshows’ and a leading defense exhibition of the Northern Hemisphere, biannually hosted by the Korean government in Seoul.

Known for its reputation of safety and world class performance, PBA has been invited since 2011 to perform at ADEX, and has the enviable reputation of being the only civilian team to be allowed to perform high-energy solo and formation aerobatic displays over the event.

For the 2019 event, Soliton and PBA embarked on a joint project to livestream a pilot’s view of the aerobatic display and to provide a real time video broadcast. This was successfully completed from the air utilizing a Zao-S, Soliton’s H.265 HEVC mobile encoder, which took the output from a Sony action camera and live streamed from the plane using the public 4G LTE network. Supporting multiple 4G networks from different operators and bonding them as a single connection using Soliton’s patented RASCOW technology, Soliton’s light weight Zao-S was able to reliably live stream with a very low latency, even with the plane going at speed and performing high adrenalin G-force stunts.

The stunt planes in action were the Wolf Pitts Pro Model-12, which are two-seater aerobatic biplanes, the highest performing aerobatic biplanes in the world. Piloted by Paul Bennet, chief pilot of PBA, he took off for a 12-minute hardcore aerobatic flight and the whole operation from the engine start up to shutdown was successfully broadcast from the air and ground by the Zao-S without any issues or lost frames. This is despite the Model-12 climbing up to 3,500ft and maneuvering rapidly with more than 7 G-force.

The Zao-S onboard was installed with three different LTE modems of the major carriers in Korea, namely SK Telecom, LG Uplus and Korea Telecom. All three carriers were bonded as a single connection. Simultaneously, the ground crew was equipped with a PXW-Z190, a professional camcorder from Sony and a second Zao-S. Both Zao-S’s on the plane and on the ground were set to encode and uplink video (max. full HD with 30fps) to a newly developed Cloud Video Switcher (CVS) from Soliton that is a hosted cloud service. This allows the streams from each Zao-S to be pushed to YouTube in real time with the ability to add graphical overlays and to dynamically switch streams between each camera for a single live playout.

The successful live stream was testament of how Soliton’s network bonding technology known as RASCOW is hugely reliable and is chosen as the live streaming device of choice for many outdoor critical missions for public safety and broadcasting. The superiority of Soliton’s network bonding technology was further demonstrated by operating reliably in a network congested area, especially as on the ground there was more than 60,000 LTE subscribing spectators using the limited network resources of the military base, many of whom themselves were live streaming from their phones to social media. 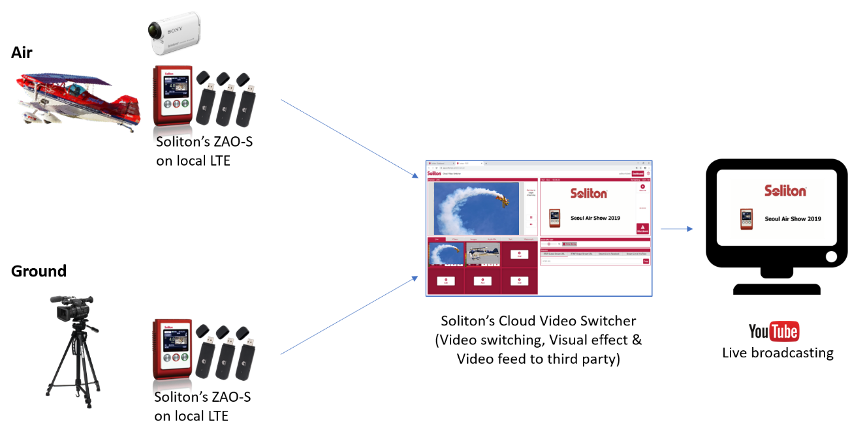 Convinced or do you have any questions?

We are happy to have a look at your current technical set up and tell you about the possibilities for implementation, to have a chat about our products, or to just answer any questions you might have. By clicking on the button below, you can directly send our Mobile Surveillance specialist a message or schedule a call right away.